Do Learning Games Work Within A Corporate Environment? 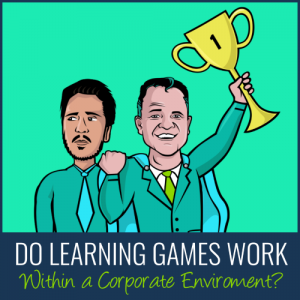 Do learning games work in a corporate work environment? It’s a fair question – and lot’s of people are asking it. We’re confident they do – here’s why.

With all of the buzz about learning games and game based learning, you’d be forgiven for thinking it’s a new thing. The truth is, learning games have been engaging people and helping with their training for ages.

Every time you step aboard a flight, you can bet that the pilot didn’t practice in an actual aeroplane. Flight simulators are, in essence, learning games and they’ve been around since the First World War!

Even though learning games have been a valid form of training for so long, many learning managers are reluctant to try them out, or even take them seriously. We’ll look at why that’s a huge mistake later, but first, let’s figure out what’s turning them off.

When it comes to embracing the possibilities of learning games in a corporate environment, the first hurdle is an obvious one. The word ‘game’ immediately conjures up images of fun, frivolity and everything that happens outside the realm of serious, grown-up work.

Given the option, even a responsible adult would rather spend time playing a game than working. The entire video game market survives on this fact, with the majority of consumers being aged 35 or over.

But why should the world of games and the world of work exist separately? Games should be thought of more as an interactive medium than merely a form of entertainment. The very elements that make games engaging have been adapted to non-game scenarios in a process known as gamification. This covers everything from coffee shop discount cards (to encourage loyalty) to progress bars on your LinkedIn profile page.

Why do games work? 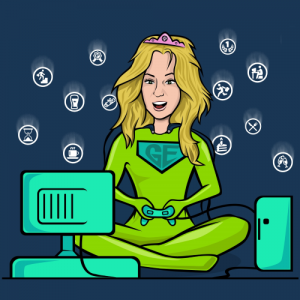 Games don’t work because they’re games – they work because they’re more interactive and demand attention from the learner. Learner engagement is one of the most prevailing issues in L&D and that’s largely because many learning initiatives have opted for the spoon-feeding approach.

There’s nothing engaging about clicking a ‘next’ arrow – learning games work by involving the learner in the content, not merely hoping that they don’t fall asleep before the final slide. Learners today lead busy and complex lives and this is no less true for learners in a corporate environment. If a learning programme doesn’t grab their attention, it can never be successful.

The added level of interactivity in learning games boosts engagement and keeps the learners’ attention, but to understand why learning games work, you need to understand the similarities between games and successful learning units. In both cases, the learner (or player) starts off as a beginner and they have to progress through stages that increase in difficulty as they acquire more skills.

In this way, game-based learning can be adapted nicely to a learning programme, but with the additional interactivity, it also has an inherent advantage compared to more traditional forms of learning content. 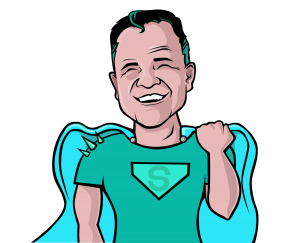 Where do you start?

If you’re thinking about adopting a game-based approach to your corporate learning, there are a few pointers you should follow.

Make sure it fits the goals of the overall programme – If you try to shoehorn a gamey element into a pre-existing learning unit, you could doom yourself to failure. In all cases, the learning game and the learning objective should complement each other.

Don’t emulate games – Don’t try to recreate a game that already exists if you don’t need to. Remember that your learners absorb knowledge by the various activities they complete within the game. Even if you think a particular element would be pretty cool, you need to make sure it’s also tied to the behaviours you’re trying to encourage.

Don’t patronise your learners – with the prevalence of gamification in all aspects of life, your learners already know the difference between a meaningful game mechanic and something that’s just been thrown in to make the learning look like a game. Instead, before you include something in your learning game, ask yourself if it will empower your learners and encourage them to complete the training.

Learning games are undoubtedly a powerful tool if used properly but like anything else, if you approach them half-heartedly, you could run into problems. How you decide to engage learners doesn’t matter – what matters is a sound strategy, not the technique.