5 Things Horror Movies Can Teach You About Online Learning 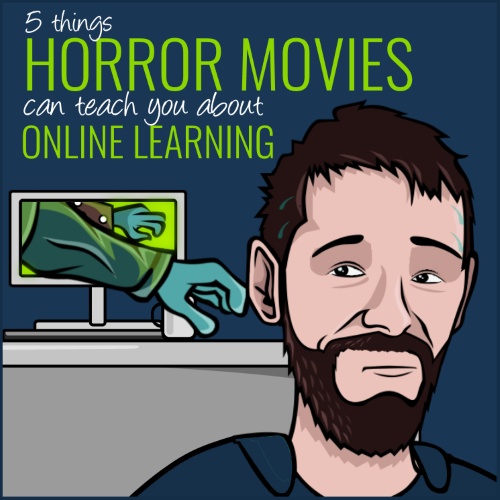 Online Learning can be a bit like a slasher flick sometimes. The day can start out innocently enough, but before you know it, you’re hiding in a stationery cupboard, too afraid to open the door for fear of the zombie learners outside trying to eat your brain.

As it’s the time of the year for horrifying hijinks, we invite you to switch off the lights, flick on a torch and gather around the TV for a monster movie marathon.

This isn’t just for the fun of it, mind you – the world of horror movies contains a great deal of wisdom that you can use to save your online learning from a fate worse than death! 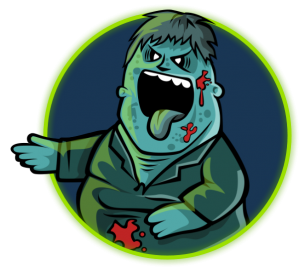 Remember that nightmare you had where Freddy Krueger was chasing you with his scary knife-glove? Wasn’t it strange that no matter how fast you ran, he was always right there behind you getting ready to do something unspeakable.

The thing with movie monsters like Ol’ Fred is that they are sustained by fear. The only way to defeat them is to stop running, turn around and face them head-on. It’s the same for your training programme.

If your efforts aren’t having the desired results, ignoring the problem will only allow it to grow into an even more insurmountable beast. So, no matter how ugly and terrifying the reality is, the only answer is to roll up your sleeves and prepare to deal with it. 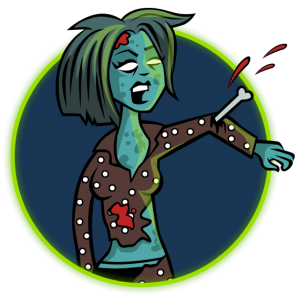 You’ve all seen it. The movie’s almost over, the monster lies motionless on the floor but just as the protagonist is breathing a sigh of relief, a gnarled claw springs up and takes a final swipe.

It happened with Michael Myers in Halloween, and with Jason Voorhees in Friday the 13th – it even happened at the end of the first Terminator movie. The killer-comes-back-to-life-for-one-last-scare cliché is such a popular trope that it almost ceases to surprise.

The lesson here is that complacency leads to certain doom. It’s too easy to assume that your training has had the desired effect after a single week’s positive results. Unless you stay on your guard and monitor your learners’ progress, you’ll run the risk of the same old horrors returning to haunt you. 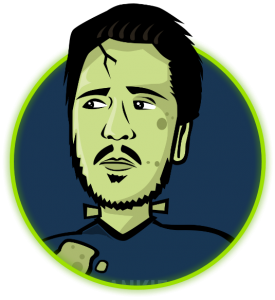 If you watch Poltergeist or the Sixth Sense, you’ll come face-to-face with the creepy child who seems to be wise beyond their years. This crops up again and again in horror movies.

From the very beginning the child speaks of ‘the little girl in the basement’ or ‘the scary old lady who won’t let me sleep’ but the adults shrug this off as the product of an over-active imagination.

Of course, by the time they realise that the child was right all along, it’s too late and Robbie’s being attacked by his braces in the bathroom.

‘What’s this teaching me about online learning?’ you ask. Well, if you look at your learning program through the eyes of a child, the first thing you’ll probably realise is that it’s just plain boring!

There’s a little kid inside all of us and your learners are no different. They want to be entertained as much as they want to gain the skills they need to succeed in their careers. If you produce dull online learning, that inner child will just throw a tantrum and your training will have no effect at all. 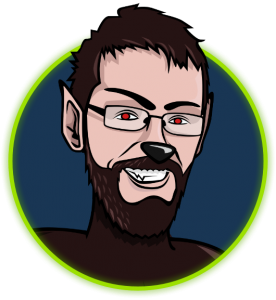 These ominous words are soon followed by a blood-curdling scream (See also: “We should split up and investigate this abandoned abattoir separately”).

Without a doubt, you’ve found yourself shouting at the TV and calling the characters all kinds of unflattering names – because the fact of the matter is that THIS IS THE MOST STUPID IDEA IN THE HISTORY OF STUPID IDEAS!!!

Never split up, never break from the group, never go off on your own, because you will be gutted like a fish and hung from a tree.

Learning on your own might not have such grizzly results, but there’s always strength in numbers. If you want your training program to be a success (and why wouldn’t you!?), you should unleash the power of social learning.

It doesn’t matter how late it’s getting, or how desperate you are to get to the prom on time, the worst idea you can have is to take a short cut down that unlit country trail.

Want to know why?

Stay on the road, for heaven’s sake! The movie might not be quite so exciting, but at least you’ll be alive and in one piece!

Similarly, there’s no quick route to online learning success. Don’t be tempted to throw an eLearning unit together in the hope that ‘it’ll do’, because unless you put some thought and passion into it, it won’t do.

There you go, folks – our spooktacular guide to avoiding online learning horrors! We hope you take note of these cautionary tales and survive every L&D shock and fright that comes your way… at least until the sequel!

Looking for ways to engage your learners and bring your online learning back to life (not in a Frankenstein way)? Download our White Paper!